A downloadable game for Windows and macOS

“On a special day Aiden opened his diary book. He looked at a specific page, which reminded him of his mom. He regretted that he made a wrong choice on that day twenty years ago..."

PS:  Hello my friends! This is my master project. my purpose is to explore the possibility of using interactive writing as a method to develop a narrative-based video game. The way I design it is to write the script first and then develop the game based on the interactive writing. The script can also be downloaded below if you are interested.

The story of which is made up, but the theme I think reflects a common family issue in reality. I believe you will get it if you have played the game. To be honest, the game itself is a very short interactive experience. I hope you like it!

Lastly, if you don't mind, please spare a few minutes to help me answer a few choice questions. To answer them, I suggest you to play the game first, and then read the script. The questionnaire form is linked below:

Don't forget to leave your comments below, I would love to hear from you. Thank you!

A beautiful little game. We enjoyed it very much.

Here is a short video we made while playing:

Thank you, Jar! I am glad that you like it.

Thank you! your streaming style is pretty cool. I like it lol!

No, Thank you for developing this small gem. I truly appreciate your feedback. Please keep up the great work.

(Gameplay footage below but first a review :) )

First off, I have got to say, after all these months of playing games on Itch.io and recording them, never have I found really a game that hit me harder than this one other than Depression Simulator.

This game tackles issues that are common in the family household and unfortunately it does end up with the children with being the bystanders and this event tragically effecting them, causing them to blame themselves sometimes as well as anxiety and depression later down the road.

Seeing the events unfold in this game made me cover my mouth in awe and gripping my chest tight after seeing what was it that Aiden wishes he was brave enough to do something about.

Thanks for making a game such as this. It definitely hit me in the feels for sure.

The only issue I see is the grammar but to be honest, it's something that doesn't bother me because it didn't distract me from the overall story :)

Thank you for your comment and video! I really like your voice and the way you interpret the story. To be honest this gameplay footage is so fresh and makes me review my game in a different perspective. I know how to improve or be better in the next one, thank you.

PS: Having learned English for so many years, I am still poor in grammar. I will check the script and make a language patch hopefully.

Aw you’re welcome, you’re welcome! :) It was a really fun game to play and I’m so glad you liked the video as well as my voice, including my take on your game.

I can’t wait to play another game like this by you! :D

Good luck with your thesis, Doc!

Thank you, but I'm not a Doc lol

I like your work! The images are looking fine, except a little creepy in the living room. Even though it's a short narrative game, you carried it out perfectly. With one story line, you made it simple and clear. My suggestion to improve is to add some mouse movement into this game, since PC gamers are always dependent on mouse~ The little guy seems shy and timid, and it keeps reminding me a childhood friend from middle school. His name is" SH Y "

I can't seem to move aiden around...

I will fix it as soon as possible, sorry about that.

you updated it but that didn't fix the issue unfortunately

That is weird. I tested it on my friend's pc and it works fine. I can send you a copy via email if you are interested. Again, sorry about the unpleasant issue. I will later update a walkthrough video in case the other players face the same issue.

Just want to thank you for mentioning this bug. Now it is fixed.

oh thank the game, not me XD

Beautiful and simple story that leaves an impact even though the length is short! Lovely game, Sky! I look forward to seeing what you do in the future! :D

I see your profile name. thx, my bro! LoL

Very powerful narrative... this kind of family situation is unfortunately all too common. Having my choices lead to the culmination of Aiden's past was a compelling experience. Especially for kids living with abusive parents, the easiest option may seem to be to ignore the problem and live through it- but it takes bravery to step up and confront it.

This was an experimental game with a lot of potential. The art is excellent, and there are puzzles, choices, and exploration- all hallmarks. Narrative games have so much potential as a storytelling device, and if you want to make more in the future, then I want to support you!

This game was very short and simple, and the english translation could be improved. Adding more content to your future projects would make a more developed and meaningful experience.

Keep up the great work! :D

Thank you for your detailed feedback! This project is a practice to test if it is feasible to build gameplay based on a story. That is the reason I did not write a long story with multiple branch storylines.

For the genre I think it is between narrative-based game and serious game. For future work or next project, to make a story more compelling, I will make more researches and even interviews to get related information.

Again, your encouragement means a lot to me! Thank you! :) 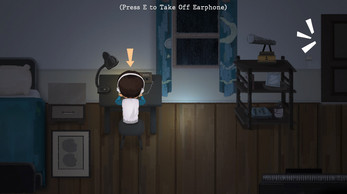 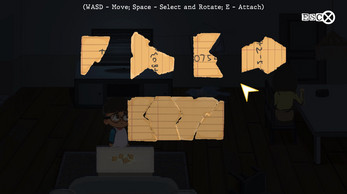 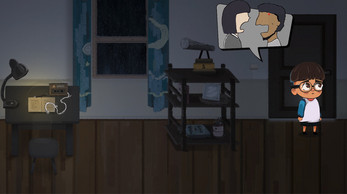